Why we should keep page rank alive #keepPR

What is page rank?

For those not familiar with page rank – abbreviated to PR, this is an algorithm designed created by Google and named after co founder Larry Page. Page rank was first developed in 1996 and was used to determine the popularity of a page by the number of links pointing to it. As more links point to a page from other high PR pages the more likely the rank of the page is to increase and then flow through the linked pages of the site passing through the page rank.

Although there have been a lot of changes to the way page rank works in recent years and it’s effectiveness when it comes to a websites ranking, it is something Google still uses today, you can view the page rank of any page with a page rank toolbar (example below).

Why page rank is not so important as it once was

Page rank was once upon a time a big part of the Google algorithm for deciding which websites were regarded as higher quality. Before the introduction of page rank many websites were ranked highly for search terms based on the amount of times a word was mentioned on the site, these words were also mentioned numerous times in the keyword and description meta tags. This lead high rankings of a lot of low quality sites driven by spam.

Page rank was introduced to combat spam and worked on the basis that if a websites content is of a high quality then others will link to it and that links would be considered as ‘votes’ for other sites, this became a much more effective way of determining which sites were of higher quality. The introduction of page rank however led to many webmasters building as many links as possible by the way of trading, buying or listing their websites on any online directory they could find, because of this in recent years Google changed their algorithm with updates such as Panda and Penguin to target unnatural links which has led to page rank becoming less effective in ranking factors.

Algorithm changes in the last few years have also targeted relevance, rather than just looking at the page rank being passed by a website, the algorithm also looks closely at quality and relevance of the linking page.

According to Google, page rank updates are consistent but are only revealed to webmasters when they do a toolbar update.

By the end of last year many thought that Google would discontinue page rank, there had been several months without an update to the toolbar when in previous years it had updated regularly and Matt Cutts head of the Google web spam team had publicly stated on Twitter he would be surprised if there was another update this year.

There was however a confirmed update on the 6th December 2013, Matt Cutt’s claimed it was done inadvertently by the team whilst working on a different service, saying that it was easier to update PR than using the old data. 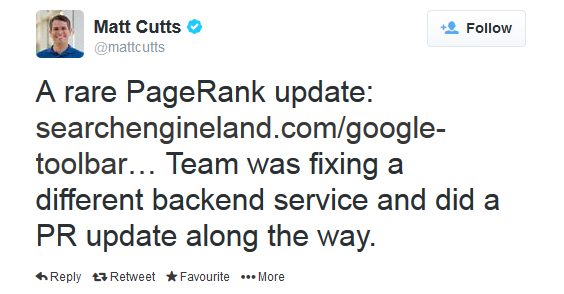 He later played down the update by stating that he expected future PR updates to be less of a priority.

Why page rank should still be important to webmasters

Whilst Page Rank is clearly not on Googles list of priorities and SEO specialists and webmasters continue to see less value in page rank, it can be a great indicator of many different things relating to your website.

Other than a websites ranking position for keywords on Google and some of the pointers given via Google webmaster tools there are not many signs directly from Google themselves about individual sites, although it shouldn’t be singled out on it’s own, Page Rank is a great way of seeing how Google works when it crawls your site and passes PR throughout your websites pages.

When viewing a sites page that has page rank, this not only means it has been crawled but that it has also given a value by Google since it has allowed page rank is passed.

When a page with high page rank links to another, Google will determine whether the page rank is passed on or not. Often pages that have links to them which Google believes are paid links the page rank will not be passed, this also applys to a whole host of other factors such as duplicate content.

You will often find many blogs category pages have ‘unranked’ page rank, this is because the content is the same as other pages (news feed, single posts) and page rank will not consider two pieces of the same information.

PR Updates give a good indication of progress

Although updates are few and far between, looking at a websites history, you can see factors such as an increase or decrease in page rank to understand the progress of the site. If you look at page rank after an update it becomes a lot more obvious which sites have paid links and which ones to avoid.

If you look at some of the biggest and most trusted sites in the world, they all have a high page rank, as page rank is now more difficult to pass, judging a sites pages rank could be a great way of looking for trusted sites to associate with yours.

PR VS DA and PA

Getting a link from a high page rank site will by no means necessarily make your site rank highly and because of this there are many other indicators available including the moz toolbar which uses a number of factors to calculate ‘Domain Authority’ and ‘Page Authority’.

This toolbar is popular amongst SEO’s and many use it instead of page rank, my advice would be to use them both together.

In order to run a successful SEO campaign you must focus on a variety of different techniques, so with this in mind your number one priority should not be to increase your websites page rank, neither should it be to try and get links from pages with the highest page rank possible.

Page rank should merely be used as an important indicator and that’s why it should not go away, for those that claim a sites page rank does not matter, type in any competitive term into Google, how many sites do you find with a page rank less than 2?